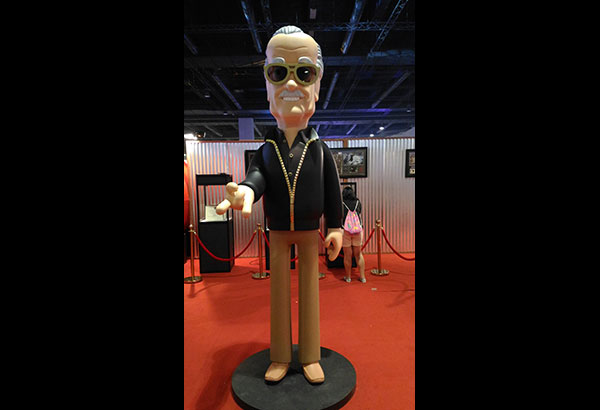 If you don’t know him from his comic books, you know him as the guy who’s had a cameo in almost every major Marvel movie to date: from X-Men to Amazing Spider-Man to The Incredible Hulk to The Avengers to Guardians of the Galaxy to Big Hero 6.

A man whose burst of creative energy in the early ‘60s led to the co-creation of the most enduring franchise characters for the Marvel Universe, including the Fantastic Four, Spider-Man, Iron Man, Thor, the Incredible Hulk, Daredevil, Black Panther, Dr. Strange, the Inhumans and She-Hulk (um, she came post-‘60s).

Stan made his Marvelous presence felt in the recently concluded ToyCon held at SMX. His personal collection of memorabilia — signed posters, comic books, director’s chairs, film canisters and other items — was on display at the Excelsior Exhibit. Unfortunately, “The Man” himself couldn’t manifest the mutant power of bi-location, but joined fans via Skype. Although one could also argue that Stan’s true mutant power is that of longevity: he has been writing comics for the past 75 years!

A veteran of the publishing business by the late ‘50s (he had written his first comic book — Captain America Comics No. 3 — in May 1941 at the ripe old age of 19), Stan had been cranking out comic books whose genres ranged from Romance to Horror to Westerns to Crime. Meanwhile, crosstown from Marvel, DC Comics had experienced a resurgence in their comic book sales via an updated version of the ‘40s character The Flash, followed quickly by Green Lantern, Hawkman and The Atom. Not wanting to be left behind by the profitable business of capes and cowls, Stan’s publisher directed him to create his own version of these “superheroes” for their company.

In 1961, Stan created a superhero team that mashed up his previous genres of horror and romance to come up with the Fantastic Four — a team of superheroes who gained their superpowers after stealing an experimental rocket and blasting off into space where they were exposed to cosmic ray radiation. But unlike their DC counterparts, their powers didn’t make them unto gods. Rather, it turned them into abominations — a woman who could turn completely invisible, a man who could contort his body into grotesque lengths, a man who could burst into flames, and a man-monster made out of orange rocks.

Wait! What happened? These weren’t colorful, godlike superheroes like those being churned out by the Distinguished Competition. On top of that, these were characters that fought with one another as often as they fought with the arch-villain of the month.

But surprisingly positive feedback from the readers of Fantastic Four convinced Stan to continue his scripting duties, so much so that by the third issue of the magazine he labeled the issue with the tagline “The Greatest Comic Magazine in the World!” (Modesty is not his strongest mutant power.) Stan knew he was on to something (hopefully it wasn’t radioactive). So from there, he helped create more of those “imperfect” characters — heroes with disabilities, heroes who were failures, heroes who were late on their mortgage payments. And thus was born the merry Marvel Universe.

During ToyCon, I snuck in a few questions with the “The Man” and came away with (borrowing from Stan’s book of adjectives) pulse-pounding revelations told in in the classic “Mighty Marvel Manner!” (Stan’s other mutant power is that of alliteration.)

Make Mine Not Marvel
After his exclusive contract with Marvel ended in 1998, he went on to create characters for other comic book and entertainment companies. He worked with Japanese publishers to create a manga called Karakuridoji Ultimo (Mechanical Boy: Ultimo) with Viz Media and HeroMan for Monthly Shonen Gangan; with Indian publisher Liquid Comics he created Chakra the Invincible; with Archie Comics it was Mighty 7; with Boom Studios he created Soldier Zero, Starborn and Traveler; and with Spike TV he created Stripperella (I wonder what her superpower is?). For a time, he even frolicked in the Distinguished Competition’s playground in a series of comics called Just Imagine Stan Lee where he was asked to reimagine all DC’s major characters like Superman, Batman and Wonder Woman in Stan Lee fashion.

But the favorite non-Marvel character he created of late is The Annihilator — soon to be featured in a film about a young Chinese expatriate named Ming who must choose between going to prison or enlisting in a secret US super soldier program where he receives life-threatening genetic enhancements from different animal species which he survives because of his Qigong and martial arts practice. Armed with these remarkable powers, he must now take down a villain who will — gasp! — destroy everything he knows and loves. (Hmm, secret US super solider programs and genetic enhancements from animal species. “The Man” doesn’t stray too far from familiar formulas.)

Pinoy Power
Over the years, many notable Filipinos and Filipino-American artists have lent their unique visual styles to Marvel’s stable of characters: from Gerry Alanguilan to Alfredo Alcala to Danilo Bulanadi to Ernie Chan to Tony deZuniga to Steve Gan to Lan Medina to Alex Nino to Carlo Pagulayan to Stephen Segovia to Mico Suayan to Ed Tadeo to Gerry Talaoc to Philip Tan to Romeo Tanghal to Leinil Francis Yu. Among others. But can you, Pinoy Marvel Zombies reading this column, guess whose work resonated the most with “The Man”?

It’s Portacio, who worked on Marvel’s most popular titles in the early ‘90s including Punisher and X-Men (where Whilce created the character Bishop who made an appearance in the X-Men: Days of Future Past movie) until he left to become one of the founders of independent comic book company Image Comics where he created the superhero team Wetworks (incidentally, While also co-created Stone, the first international comic book that dealt heavily with elements of Filipino mythology).

Despite the poor Skype connection with Stan, which made it difficult to ask more insightful questions about his body of work (no doubt a nefarious plot by Hydra), a ToyCon attendee was able to ask, “If you could be one of the Marvel characters, which one would you be?”

“Tony Stark,” he answered. Wow, I thought. Was it because of his genius-level intellect, his keen fashion sense when it comes to armor or his well-groomed ‘stache?

“Because he is so rich and the girls love him,” Stan replied.