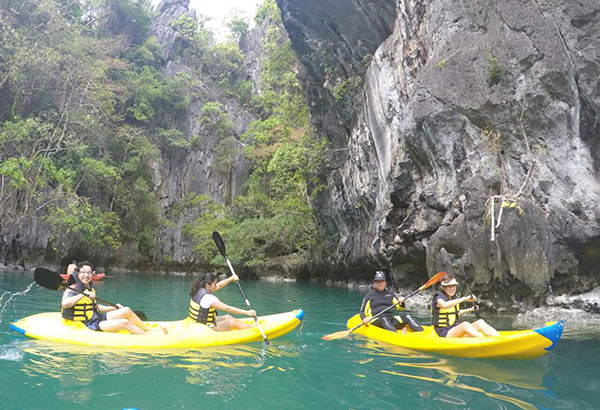 Beware of the long-tailed macaques at Lagen Island: if you feed them, they will linger in your company until you give them a Diet Coke and a pack of cigarettes. And sometimes they will try to sell you investments not registered with the SEC.

Where the monkeys have tails longer than their bodies. Where the pigs are as large as cows. And — when the season calls for it — where the jellyfish are as big as bilaos.

No, my three female readers, I did not visit Congress. I visited El Nido, Palawan.

El Nido is located in the northern tip of the province of Palawan (but don’t let the distance deceive you. To get to our resort, Lagen, it took us an hour by plane and roughly 30 minutes by boat. Take that, EDSA traffic on a payday weekend!) Northern Palawan is home to over 900 fish species, over 100 bird species and a great variety of marine mammals, reptiles and invertebrates (but none of those invertebrates can be found in Congress).

As our boat coasted across the waters of Bacuit Bay en route to our weekend getaway, the first thing that overwhelmed me was the towering limestone islets and islands (there are about 45 of them) that emerged from the sea. And as I took in these natural art pieces that were sculpted out of water, wind and sand, I wondered: How did patches of dense foliage grow on these stone formations?

According to our tour guide slash environmental officer, those patches of green were the result of millions and millions of years… of pooping. That’s right. Some 250,000,000 years ago, when the first Dirty Old Men (DOMs) emerged from underneath their rocks, pterodactyls strafed these islets with dung bombs filled with fruit seeds. Their poop provided fertile ground for plants to eventually take root on these limestone formations (I hear this pooping technique is an age-old technique that DOMs use to regrow their bald spots).

(I’m not sure, though, if this accurately captures what the guide was saying as my wife and I were busy channeling our inner Jeremy Renner and Rachel Weisz, taking selfies while recreating the El Nido scenes from The Bourne Legacy).

But what’s more interesting is what is hidden inside those limestone formations. Upon closer observation, there was a papag (bamboo bed) laid out on wooden slats that jutted perilously from some of the cliff sides.

“Wow, that’s a high cost of living,” I remarked.

“Those are the balay balay (houses) of the busyadors (nest gatherers). They’re found near entrances to the caves,” the guide explained.

“The nests of the balinsasaway (germaine swiftlets).”

“I see. So the busyadors collect the eggs of the balinsasayaw from the nest?”

“No, they collect their nests.”

“Why? What are those nests made out of? Solid gold?”

“The nests are made out of 14 layers of solidified bird saliva.”

“Huh!? I make a living out of hosting. I risk bodily harm if I make talsik laway on my guests. But over here they risk life and limb to gather dried bird laway!?”

“The bird’s nest soup is a delicacy among Chinese.”

“Where can we start training to be a busyador?”

As I contemplated how somebody first came to realize that a bird’s congealed saliva could be edible (but, since bird’s nest soup is supposedly good for raising libido, it must have been one of those prehistoric DOMs), we were ushered to the organic farm that supplied the produce for all the El Nido resorts. The farm manager demonstrated how they concocted their organic compost, which was a mash-up of kitchen waste, cow and chicken dung, vermicomposting (which is basically worm dung as well) and carbonized rice husk. In fact, I saw a carabao happily composting himself on the farm grounds.

“Can I also contribute to the production of the organic produce in the farm?” I offered the farm manager.

“I’m sorry, Sir. But you might not be totally organic.”

“I know that some of my body parts might look enhanced, but that’s just bloating.”

“No, Sir, what I mean is that the animals that we raise in the farm are hormone-free and eat only organic products. But human waste can contain harmful bacteria that could be hazardous to other people’s health.”

“Waste not, want not, I say! But if the pigs aren’t given growth hormones, they must be pretty small around these parts.”

“Well, you can see them for yourself, Sir.”

When they took us to the pens, I saw a pig who whose image will from now on give me bangungot.

“Why is this baboy so freaking big!? Did you expose it to the same mutagens that the Ninja Turtles were exposed to?”

“Those are breeder pigs, Sir.”

“I can see those are breeders from the size of their coconuts! If he swings those things around while he walks, they might hurt somebody. Are you sure these pigs aren’t mutants? They aren’t as smelly as I imagined they would be.”

“That’s because these pigs are on a strict diet. We feed them microorganisms that quicken the decomposition of their dung and also makes it less stinky.”

“Could you give us some of those microorganisms for takeout?” my wife asked. “It will go a long way to preserving the dignity of our marriage.”

After getting a six-pack of microorganisms, we finally docked at our eco-sanctuary resort in El Nido’s Lagen Island, nestled between a lush four-hectare forest and a calm, shallow lagoon with a dramatic limestone cliff as its backdrop. Our little plot of paradise for this weekend was one of Lagen’s newly refurbished whitewashed cottage that sat on stilts above the water and was framed by a thriving mangrove forest. The view from the room opened up to a panoramic view of Bacuit Bay punctuated by the iconic Lagen Rock that welcomes all visitors to the resort and, in the late afternoon, to a spellbinding view of the El Nido sunset. With a sunset view like that, you don’t need no bird’s nest soup.

My wife and I were sorely tempted to vegetate in our cottage for the duration of the weekend and take selfies of the room and of the view at different times of the day. But since the microorganisms had not kicked in just yet, my wife shooed me out of the room to check out the local wildlife. The resort was thoughtful enough to provide us with a eco-checklist guide of the animals you could find around Lagen and El Nido.

“So what are the show times for the animals?” I asked the environmental officer.

“Sir? The animals come and go as they please.”

“But that’s not how they do it in Disneyland.”

Despite that, the officer provided me with some insight in the event of a chance wildlife encounter. First of all, if you come across a white-vented shama — a melodious bird endemic to the area — it might think you’re just pink, hairless monkey. If so, then it will fly right in front of you, stare you right in the eye and start singing. If you start singing along with the shama, it might just join you for karaoke. Just don’t add My Way to the playlist or else patayan na yan.

Now, if you spot a water monitor lizard — also endemic to Palawan — you will see them scamper into the water and swim around for about 30 minutes. If it is in the mood, it will even snorkel with you. If it likes you enough, it may even let you buy it dinner and drinks. But be warned of those long-tailed macaques! Feel free to observe them from afar but do not attempt to feed them because those primates are cunning and will take advantage of your generosity. If you feed them, they will linger in your company until you give them a Diet Coke and a pack of cigarettes. Sometimes they pretend they are housekeeping and will knock on your door incessantly. And sometimes they will try to sell you investments that are not registered with the SEC.

It’s a good thing I only invested a third of my life savings with that sweet-talking macaque before the El Nido crew whisked us away for the #YOLO portion of our entire Palawan trip: a visit to the simply but descriptively named Big and Small Lagoon at Miniloc Island. According to our tour guide, scientists believe that these lagoons were actually caves millions of years ago (but only the DOMs can verify that assumption) until the roofs of the caves collapsed and lagoons emerged in their place. (Both lagoons boasted rich marine life, but we were soundly advised by our guide to avoid jumping into the waters because not all the marine life there is tourist-friendly. I also didn’t want to boast that I lost some pink parts to white-tipped reef sharks or blue-spotted stingrays that lurk in the shallow lagoons.)

But I was more than happy to stay on the boat as it lazily explored the perimeter of Big Lagoon while taking in the orchid-lined cliff walls and turquoise-green waters. And while I was there, I did the only thing that every self-respecting Pinoy would do in this natural wonderland: took hundreds of pictures and selfies to post on Facebook and Instagram as soon I got a clear signal.

Then the next self-respecting you can do as a Pinoy after visiting the lagoon is to enjoy Twin Popsies (there was an ice cream man in an outrigger right by the entrance of the small lagoon. May sounds pa siya); or enjoy a meal in a floating restaurant where you can do some karaoke. With some shamas.

Damn you, Palawan, why are you just so Instagrammable? I’ll be back. Especially because I need to collect my dividends from those macaques.