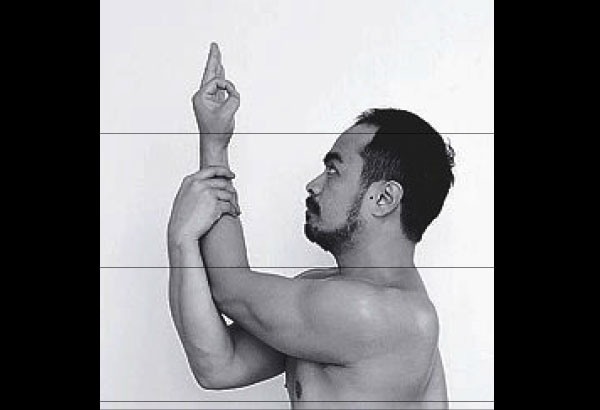 He likes to do yoga. In the nude.

And he wants you to join him.

After being a fitness instructor for over 10 years, the high-impact aerobics classes he taught took its toll on his right knee. After doctors suggested that he practice “mindful movement,” he gradually shifted to yoga. Although hesitant at first, he embraced the practice and even enrolled in a teacher’s training program. And — somewhere along the way — this yogi lost his attachment to wearing clothes. He wants you to lose that attachment, too. I asked him why in a “clothes mandatory” interview.

RJ LEDESMA: Like yourself, I’ve been an Ashtanga Yoga practitioner (a system of yoga involving synchronized breathing with a progressive series of postures) for about 10 years. Unlike you, I still like wearing the barest of clothes (short shorts, more colloquially known as “female pink part shorts”).

PAOLO LEONIDO: It was actually back in 2011 when I started practicing Ashtanga at home and started doing yoga in the nude. It was very liberating.

And it’s okay lang because nobody sees you.

I’d like to try naked yoga at home, but I’m afraid it might distract Yaya from her household chores. When did you discover that the tyranny of clothes enslaved your yoga practice? Or did your clothes just spontaneously combust during yoga practice?

It was more of a personal thing. At home, I started practicing yoga topless, then just with underwear, then finally with no clothes on. After that, I researched online to find out it there was actually “naked yoga” and I was pleasantly surprised to find it’s an ancient practice in India.

It’s called nagna yoga (nagna is the Sanskrit word for naked). The point of nagna yoga is detachment from “worldly” things like desires, money and even your body. Whatever you have right now, you need to detach from your physical body because your body is just a temple and you are experiencing what it means to be human.

(DOM representative: But how can I detach my enhancements?)

(DOM representative: Can I get your address, Paolo?)

I told them that we would be practicing yoga, but just naked. We started practicing naked yoga with dim lights because we were still embarrassed. But as the classes progressed, we switched to natural light.

Eventually, I started offering the naked yoga classes to the community. I’ve invited fellow yoga teachers to join my class. But they told me, “I love your idea! But I don’t think I’m ready yet to be open.” So it looks like many people still have to work through their issues.

(DOM representative: Just how big can those issues be?)

But after having gone through the experience of naked yoga and sharing it with my friends, I realize the main issue that prevents them from engaging in naked yoga is worldly desires. I’ve had a chance to review other naked yoga studios around the world, and all these classes talk about “liberation” or “freedom.”

(DOM representative: I support their demands for freedom.)

Before any class, I always asked my students, “What is your intention in joining the class?” One answer really stuck with me, when my student said “I need to find myself.”

(DOM representative: I need to find parts of myself too that I haven’t seen in a few hundred years.)

A lot of people have self-control issues. Through the class, my students discover how to be more accepting of themselves. They are able to turn “inwards” and forget about the “externalities” like technology and work.

What are the other advantages from practicing naked yoga versus non-naked yoga? Aside from freedom of movement, the lack of friction and a good laugh?

Well, first, you don’t have to buy yoga clothes, so you can save money. (Laughs) Second, you allow your skin to breathe.

(DOM representative: Great idea. Some parts of my skin have grown moldy since they were last exposed to sunlight.)

Then you also become mindful of how your skin and your body works on a physical level. Even since we were born up to adulthood, we are always rushing to wear clothes so being naked becomes taboo. Naked yoga is a good discipline for you to be “comfortable” (in your own skin) while developing self-esteem and self-confidence regardless of your body type.

(DOM representative: Any body is my type.)

Because of a “commercialized” lifestyle, people have a misconception that they need a certain “body type” so they are discouraged from joining. For example, some people tell me they don’t want to join the class because they don’t have abs. I remind them that they are not joining a bikini contest or Superbody challenge. It’s just a yoga class without clothes.

Buti nalang I already have an imaginary superbody.

Since most of my male students are from the gay community, they often joke, “What if my member ‘stands at attention’ during the session?” I jokingly tell them you should be thankful that you’re standing at attention because it means you’re healthy! It’s perfectly normal to be nervous during your first naked yoga session as everybody is nervous during their first practice. And if you “stand at attention,” you’ll be surprised that it will die down in just a few minutes.

(DOM representative: I better leave the Swedish pump at home then.)

Don’t you get distracted by staring or laughing or being mocked by somebody else’s pink parts?

Again, it’s normal to notice the genitalia of the other person and then do some comparisons in your head. (Laughs) But it’s only a passing thought. During the practice you become more centered, grounded and focused, then forget (about the others and their genitalia). That’s when you realize two things: how often you judge yourself and how powerful your mind can be.

Do you have to be totally naked during the yoga session? Can’t you wear a little something, like a security blanket? Or socks?

When I organized a session in Cebu, there were a few students who had a hard time taking off their clothes even when the lights were very dim. On the surface, you might think they just didn’t want to remove their clothes. They cried and apologized to me and to their fellow students for the incident. As I was guiding them, I realized that they had “unresolved issues” they needed to face before shedding their clothes.

Okay then, no socks. So if you don’t participate, can you just watch a naked yoga session? Or at least make bantay their clothes (or the lack of them)?

I tell people who want to watch that it’s P1,000 per session. (Laughs) Then I invite them to join. For me, the best teacher is experience. If you put yourself through that experience, you realize “Oh my gosh, mali yung judgment ko about this kind of yoga practice.”

To see is to believe. Is there any downside to doing naked yoga? Like inadvertently falling onto undulating rolls of fat?

Men sweat profusely when they attend my class because there’s no aircon in the practice room. So if they forget to bring a towel, they will slip on their own sweat. Before I start the class, I also make sure everyone has freshly showered. If someone hasn’t showered yet, I ask them to shower first and we wait for them before we start practice.

Is there a studio or locker room or a safehouse or a bomb shelter where you regularly practice?

For the protection of both my students and the place I rent, I don’t disclose the location of the yoga sessions on my page. But the sessions are usually in Ortigas, Makati or my home studio in Antipolo. But my mom doesn’t know I teach naked yoga because my home studio is detached from the house. (Laughs)

Lagot ka when your mom reads this column! Wait, I never got to ask, are there separate classes for men and women?

Right now, it’s just a men’s class that has been ongoing since 2011.

(DOM representative: See you there, yaya.)