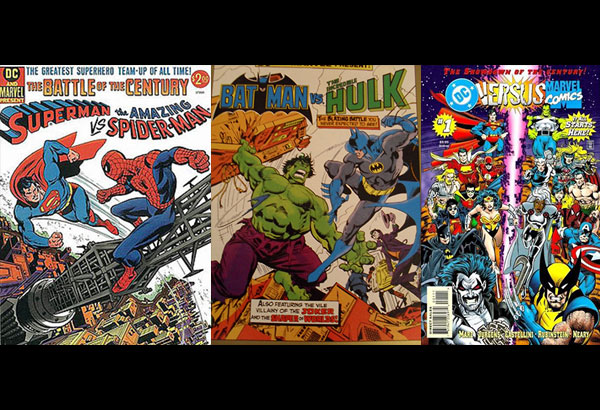 The box-office results of the two biggest comic book franchises are in (much to the dismay of the already sad Ben Affleck) and it looks like the shield has silenced the batarang: In its third weekend, Captain America: Civil War has earned $1.053 billion worldwide. Meanwhile, a month and a half into its box-office run, Batman vs Superman has “squeaked” by with $870 million worldwide.

For a diehard DC comic-book fan like myself (all the way to my Aquaman-themed underwear), it’s like a repulsor ray through the heart. Marvel wins the battle this time around.

And though this may be the first time that these superhero universes have gone head to head in the box-office, these heroes have come to blows many, many times in the funny books.

Superman vs. The Amazing Spider Man (1976)
The very subtly named “Superman vs. the Amazing Spider-Man: Battle of the Century” was an oversize single-issue comic which took place in an imaginary universe (wait, aren’t they all imaginary!?) where both DC and Marvel superheroes coexisted. The shenanigans begin when arch-foes Lex Luthor and Dr. Octopus hook up in prison and share their squad goals of conquering the world and murdering the superheroes who put them behind bars, in no particular order. In a classic superhero trope style, Lex cosplays as Superman and shoots a teleportation ray that conveniently sends Lois Lane and Mary Jane Watson to an unknown location. (It’s comics, people). Supes mistakenly assumes that Spidey was behind all this. But instead of going to the neighborhood superhero bar to sort things out, they would rather let their fists do the talking. (Bad move, wall-crawler. Bad move).

Money shot: Spider-Man punches the spitcurl out of Superman because Lex Luthor discreetly fired a gun at Spidey that irradiated his costume with a light similar to a red sun which negates Superman’s powers. (Haaaay, comics).

Batman vs. The Hulk (1981)
Wait, seriously!? Wasn’t this like a one-panel comic gag? What could Batman possibly have in his utility belt that would stop the Hulk? (Well, let’s find out). Assuming a false identity, Bruce Banner worked in a division of Wayne Tech where he assisted in the development of a gamma gun designed to cure diseases. Pero may lihim si Bruce. His true agenda in working for Wayne Tech was to find a cure that prevents him from having the worse temper tantrum in the world. Of course, Murphy’s Law kicks in as the Joker breaks into the lab to steal the gamma gun. Bruce gets angry, and you don’t like him when he’s angry. (Sigh, there goes another pair of perfectly stylish violet pants). The other Bruce swings in as Batman to stop Joker’s nefarious plan. (Wait, you’re both named Bruce!?) Joker goads the Hulk into smashing Batman into Bat-concentrate. (Someone should really get these heroes a relationship counselor before they cause more property damage).

Money shot: Realizing that he could not out-punch Hulk (because he is the World’s Greatest Detective), Batman whips out some knockout gas from his utility belt that could knock out a “herd of elephants.” Batman then gives the Jade Giant a swift kick in the solar plexus that causes him to suck up all the gas and “topple him like a poleaxed redwood.” (In other words, na-Du30 si Hulk). It’s a good thing that Batman didn’t kick the Hulk any lower lest he deal with an Angry Bird problem as well.

DC vs. Marvel or Marvel vs. DC (depending on which publisher was printing the comic book that month) (1996)
Unlike the two previous “crossovers,” this mini-series assumed that both DC and Marvel existed in separate, distinct universes. In fact, both of these were universes personified as godly brothers who become aware of each other’s existence. And, in a testament to true brotherly love, they challenged one another to a series of duels involving each other’s respective heroes. The losing universe would cease to exist, which is a major bummer. However, what we didn’t know was that the truly nefarious scheme of these godly brothers was to drain the wallets of diehard DC and Marvel comic book fans.

Money shot: There were 11 battles fought between the superheroes of both universes. (In fact, fans could vote on the outcomes of some of these battles. I doubt SWS or Pulse Asia did any pre-battle surveys, but D’Strafford seemed to be sure of the outcomes.) Among those battles were: Superman vs. the Hulk, where Superman took out the Hulk with one knockout punch (no kick to the solar plexus or angry bird region here); Spider-Man vs. Superboy, where Superboy wins because he’s, uhm, super-strong (and he finally gets back at Spidey for that 1976 sucker-punch… that’s right, wall-crawler, you’re my b*tch now); and Batman vs. Captain America, a match that ended in uncertainty because they were too evenly matched. And that’s what Ben Affleck would have wanted as well in the box office with Chris Evans.