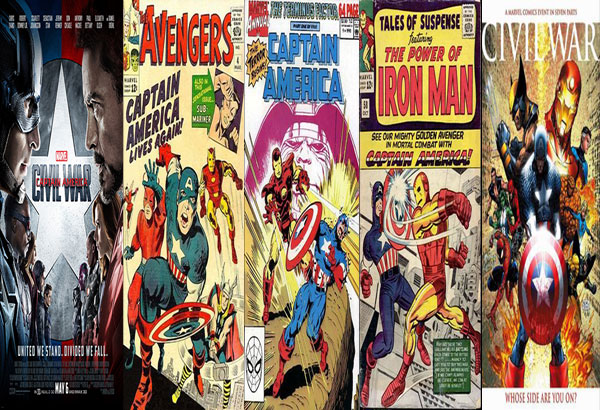 No, I ‘m not referring to the state of our country after the National Elections. Rather, I’m referring to the movie that is helping Mickey Mouse turn his clubhouse into the equivalent of the Playboy mansion.

Captain America: Civil War — the latest installment in the Marvel Cinematic Universe — plays up a classic superhero trope where the good guys have a misunderstanding that leads to them pummeling each other until one of them breaches single-digit IQ levels.

But for the comic book geeks who dare live amongst normal people, we know that this isn’t the first time that armor has tasted shield. As Disney prepares for the inevitable release of Avengers vs. Star Wars vs. Mickey Mouse Clubhouse, let’s review some of the most memorable clashes between Cap and Iron Man that have paid for Stan Lee’s pension.

(Bonus: I’ve curated the “winning lines” from each of these battles that can be re-cycled by our Presidentiables for the last leg of their campaign!)

The Avengers (composed of Thor, Iron Man, the Wasp and Giant-Man) rescued the frozen delight that was Captain America — who had been worshipped as an ice cube god by a bunch of Eskimos since the end of World War II (and you thought teleseryes were complicated…). A few minutes after being de-frosted, the Avengers could hardly believe he was the Captain America because he had barely aged. To prove them whippersnappers wrong, he challenged all of them to a monumental “duel” that lasted all of one page. Cap sure had ice in those veins.

Winning line: (From Cap) I’ve no need for tricks! Test me! Try to conquer me.

Winner: The Avengers franchise (as Cap has been in almost every incarnation of the Avengers since that issue).

Master of disguise the Chameleon cosplays a wounded Captain America who ambles up to Iron Man and tells him that the Chameleon has used an “electronic thought transference machine” to download all of Cap’s memories so he can impersonate the “Living Legend” and prey on unsuspecting Captain America fangirls. Since Iron Man could not verify this information via Facebook, Iron Man confronts the “real” Captain America in the Avengers Mansion and attacks him under the impression that he was the Chameleon. But before the fight could become UFC-worthy, Iron Man suffered a fate that befalls all smartphone users worldwide, his armor ran out of battery charge.

Winning line: (From Cap) Now look fella, a joke’s a joke. But let’s not carry it too far.

Winner: Cap (Because Iron Man forgot to bring a power bank to the battle).

Something fishy is going on
When: Captain America Annual #9 (1990)

A manned probe into a volcano inadvertently unleashed spores that were seeded by the alien conqueror Terminus the Destroyer (Sige, absorb that muna). The spores which infected local wildlife found their way into the bellies of the villagers during an annual trout festival (and into the belly of Iron Man as well. Apparently, he does not have an ironclad stomach) whose effect was to drive all of them into zombie-like rage (Think World War Z and not Walking Dead). Cap surmised that only extreme cold that could kill the spores, so he taunts the infected Iron Avenger to battle him on top a snowy mountain until the cold could freeze the spores in Iron Man’s innards (Sigh. Where are your vegetarian heroes when you need them?).

Winning line: (From Cap) That’s it, shell-head! Knock me around like an eight ball looking for a side pocket!

The mini-series that inspired the movie, the story (written by Mark Millar, whose original comic books concepts Kick-Ass, Kingsman and Wanted have been turned into movies) begins after a botched attempt of B-level teen superheroes (who have their own “reality show”) to take down four A+++ villains leads to the death of a park full of children. This tragic event leads to the creation of the Super Hero Registration Act — an Act that Cap opposed because he felt that heroes must be above government lest they end up being controlled by politicians who will, in turn, determine who the “villains” are (Darna, Captain Barbell, please don’t sign up). Meanwhile, Iron Man was in favor the Act as he felt that the superhero community did not “police” themselves enough, and that many heroes still needed proper training and oversight. Of course you know, this means war (and comic sales) as super heroes aligned themselves with either Cap or Iron Man (but Cap and Iron Man only come to blows twice in the mini-series).

Winning line: (From Cap, with tears streaming down from his eyes) Look at us, we’re just fighting.