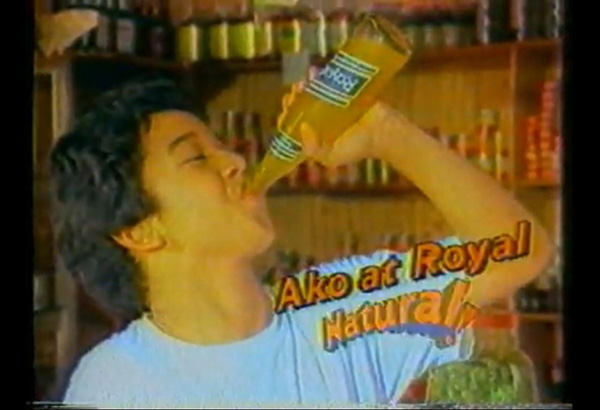 Sino ba siya, Mommy?” squeaks the little girl whose mom insists that I pose together with her.

During a period in our history when pagers were the apex of high-tech communication, when shoulder pads were not yet outlawed as a crime against fashion, when twerking was still considered an involuntary muscle contraction, a period known as the ‘80s — I was known as “Joey,” a pudgy teenager with a helmet of wavy, undulating hair and a chinky-eyed grin who hawked orange soft drinks to subsidize his incorrigible comic book addiction (RJ’s, not Joey’s).

“Joey” was your ‘80s version of the clean-cut, boy next door who used his resourcefulness, quick wit and “naturally” boyish charm to turn awkward situations in his favor (In other words, Joey’s core competence was to make palusot. If the Joey commercials had continued up to now, he would have been a natural as a congressman). And Joey did all this palusot-ing while chugging down Royal Tru-Orange. (Joey was quite the multi-tasker.) No wonder the commercial’s popular tagline was “Ako at Royal, Natural!” (A line that people have incidentally asked me to reenact for them 5,734 times.) (EDITOR: It’s true. He’s been counting.)

Though the first Royal commercial aired over 26 years ago (old enough to have gone to graduate school, gotten married and produced two kids), it is through the magic of prosthetics, preventive hair loss treatment, and virgin chicken sacrifices to elder gods that the deserving few who lived through the ‘80s still recognize me for my naturally boyish looks that I insist I still have.

I recently saw a link that was forwarded to me from a Facebook page called “Batang Pinoy” dedicated to growing up in the Philippines. Apparently, the Qatar-based OFW who curates the page managed to string together all the available Royal Tru-Orange commercials under the “Joey” series (https://www.facebook.com/video.php?v=329476697258124&pnref=story) and the link was shared by over 6,323 people and counting (It’ll be up to 7,000 by the end of this week if Yaya religiously watches the link 150 times a day). I was amused by the comments of those who had grown up (along with the millennials who had never seen) the (mis)adventures of Joey and his barkada.

(Allow me to digress: there is a reason that you will never find all of the Joey Royal Tru-Orange ads floating around online. Because (spoiler alert) I uploaded most of those ads on YouTube. However, there was a little girl who played my onscreen sister in those ads who happens to be my real sister. After acting in several of those commercials, she chose to quietly and permanently retire from public life and enter the field of education. And — God bless her — she has threatened to send her three kids to impale me with Barbie dolls and action figures if those commercials ever make their way to social media.)

Among the posts that I found amusing was that many ‘80s babies believed that Royal contained medicinal benefits for those suffering from fever, coughs and allergies (I dunno, it might have been the all-mighty power of pulp bits or beta carotene). Meanwhile, I found other comments quite flattering, like “Ow gwapo nman c Rj ledesma.mgaling nga umarte sa commercial natural lng dating…” (Thanks, Yaya, for using your anonymous account.) Other comments helped me practice the value of detachment such as this heartwarming quip, “Layo ni Joey nung bata pa cute, nung tumanda… uhm ewan.” Followed by this precious gem: “Buti p panahon nuon kahit sino pwede maging modelo..lol.. Ngayon kainlangan magandat gwapo mga model eh… Tsk tsk.”

But, you know what? The truth hurts. As much as my yaya insists that they hired me for my good looks while I insist they hired me for my six-pack abs, I think they may have hired me to play Joey for my acting chops. When kahit sino pwede na maging modelo types ask me how I became “Royal-ty,” the answer is rather common: I auditioned for the role (and so did several hundred other hopefuls, I imagine).

In my pre-Royalty days, I played supporting roles in a string of commercials that ranged from Ramcar to Anchor Butter to Jollibee to Purefoods Hotdogs to Green Cross. But before I was chosen to essay the role of Joey, I had a chance to hone my acting skills by joining my grade school’s yearly elocution contests, appearing as a regular in the primetime teleserye Verdadero (Incidentally, my onscreen mom was played by Irma Alegre and the mistress of my onscreen dad, the late Ramil Rodriguez, was played by Maria Montes. To the DOMs who recall those names, did your pacemakers skip a beat?), joining acting workshops and musicals of Repertory Philippines (which included Zorba the Greek and Yanky Panky ’98, where I shared the stage with fellow cast member and the yet-undiscovered Arnel Ignacio). In fact, when I auditioned for the role, I was still reeling from a theatrical high having performed my first major role in the Rep play Today, I Am A Fountain Pen opposite my acting workshop mentor Monique Wilson.

For those who have a vague recollection of the ad, this is how it went down: As the adolescent Joey, all dressed up in a hip ‘80s Hawaiian-inspired puruntong shorts and oversized Pink Panther T-shirt, is fiddling with his bicycle in the family garage, his mom screams from the kitchen “Joey, ang mantika, ano ba!?”

At first, Joey shakes his head as he contemplates an empty mantika bottle in his grip, reluctant to execute an embarrassing task that has the potential to turn him into a social pariah. But after a moment of contemplation (perhaps fearing that his mom might get all Royal on his behind if he fails to complete his errand), Joey decides to make the arduous trek to the neighborhood sari-sari store — bottle in hand —praying that no one notices (buti nalang there was no Instagram at that time). But, lo and behold, Jake, the neighborhood bully is hanging around in all his sleeveless shirt glory at the tindahan. Naku, if Jake even spies Joey’s mantika bottle, Jake will guarantee that Joey will be so ostracized in school that Joey will be involuntarily celibate for much of his adult life. Of all the things his mom makes him buy at the corner store, it had to be the infernal mantika. So Joey quickly hides the bottle behind his back (clever thinking, Joey, clever).

Jake sheepishly grins “Ah sige ha.” as he gingerly skips away hoping that the ground swallows him up.

Drama. Conflict. Comedy. Product endorsement. A Royal rumble. All those elements squeezed into 30 seconds by a newbie director who wasn’t really known for making commercials. Although the director dabbled in making movies. You may have heard of him? The late, sorely missed Lino Brocka? The director of Wanted: Perfect Mother, Maynila Sa Mga Kuko Ng Liwanag and Orapronobis, among many others? Yes, that National Artist Awardee for Film Lino Brocka. Orange you glad you know that now?

Along with the pilot “Mantika” ad (which has since been named among the Top 5 Pilipino Advertising Klasiks) Lino Brocka also helmed several commercials that followed it, which saw the cast grow to include Joey’s reel (and real)-life sister, Joey’s barkada Gilbert, Jingo and Jake (because Joey now owned Jake’s a$$) and Joey’s eventual love interest Jenny.

Though the fizz has since faded from those carbonated days, though the Royal mantle has been passed to the late, great Francis M then to Magean Aguilar then eventually to a transforming soda machine, though my fan club is down to my three female readers, I am very moved that there are still people who recall those commercials with fondness, kahit na si kahit sino pwede na maging modelo. I’m tickled to my pink parts that the Joey series has become a lasting part of many an ‘80s Pinoy’s growing-up years, much like scar tissue.