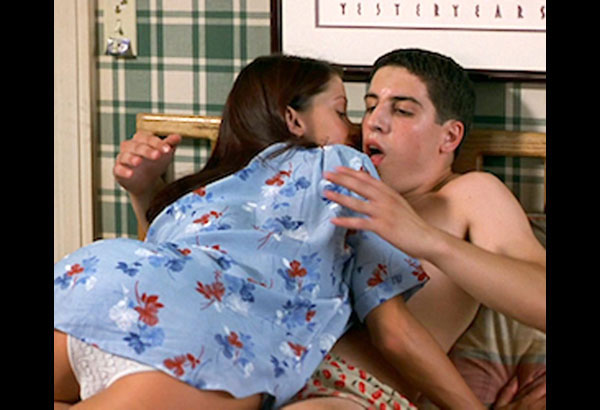 We’ve come this far, so now a return visit with urologist Dennis Serrano who explains how best to treat premature ejaculation.

In fact, I had a lot of DOMs (Dirty Old Men) complaining that we had not yet resolved the root of their premature ejaculation problem. They can’t hold out much longer because their pacemakers are running low on batteries.

So before these DOMs pelt me with their gold chains and clutch bags and wooden clubs, we visit again with Dr. Dennis Serrano, urologist, to find out the reasons, the techniques and the medications to treat premature ejaculation so that we can all come to a satisfying conclusion.

RJ LEDESMA: Doc, I’ve come yet again to see you. So is premature ejaculation similar to premature baldness? Is it — heaven forbid — genetic?

(No Girlfriend Since Birth representative: Why not yet, God!? Why not yet!?)

Can premature ejaculation also be psychological?

Definitely. There’s a lot of evidence to show that it happens because of psychological or situational or stress issues. That means (premature ejaculation) can be a transient thing. Once your issues are resolved, then you go back to the regular cycle of excitation, erection, ejaculation and all of that.

So I should tell my spouse not to stress me out for our own good?

(RJ’s wife smacks him on the head.)

Can I amend my affidavit? Of course my wife never stresses me out. I stress myself out. Can premature ejaculation also be a physical problem?

We did think before that it was (a physical problem). And this is the crazy part! How did we treat premature ejaculation before we had medicine for it?

With a smack to the head?

We put anesthetic gels on the penis so that the penis would be (sort of) numb to stimulation. (Since it was thought to be) a physical thing, your penis is so sensitive that just a little stimulation would make you ejaculate. To a very small extent it may have worked. But to a large extent, it did not.

To a large extent, your penis becomes as sensitive as the penis of a Ken Doll.

What else did it do? Well, since you had a penis full of anesthetic jelly (that was) inserted into the vagina, then the vagina also becomes numb. So everybody is numb and angry after sexual intercourse because it didn’t work.

(DOM representative: I still have the missing limbs to prove it.)

We also thought that the start and stop “technique” would work, which was stopping (in the middle of sexual intercourse to lessen the stimulation of the penis and prevent premature ejaculation).

(NGSB representative: How exactly does that technique doc? So I will know what do if my time comes. Or is about to come too soon.)

I am sure that there are people who are successful in using this technique to prevent ejaculation. (However) for those who have premature ejaculation, even before they start pumping, they ejaculate already. So we became more brutal and (introduced) the start, stop and squeeze technique. You squeeze your penis—

Naku, doc. Aren’t you worried that if the patient tries that, he might spontaneously explode?

You squeeze the forefinger and the thumb on the most sensitive part of the penis, which is the glans, which I’m sure you already know.

I will double check on that part after this interview.

But again a lot of times it doesn’t work for these people (who suffer from premature ejaculation). Because even before there is a lot of stimulation in the glans, they’ve already ejaculated. I’m sure a lot of your readers will not be able to imagine it because a majority of them (enjoy) a normal sexual cycle.

(NGSB representative: What type of recreation? You take it to the park, you watch a movie, you go out for a couple of drinks?)

So that they can do more or do better. Although we don’t recommend using (medication) if you do not have premature ejaculation, it will delay ejaculation in men who have a normal “latency” period.

Can premature ejaculation also be caused by side effects due to medication?

(DOM representative: Where can I take this class?)

In the past, SSRIs were given for patients who were depressed so they could have more serotonin in the brain and feel better about themselves. The side effect (of this medication was) “Doc, I have difficulty in ejaculating now because before I was ejaculating normally even if I was depressed. But now that I have started taking SSRI’s, I’m finding it hard to ejaculate.”

(NGSB representative: Is that something that they should or should not be happy about?)

(DOM representative: Please let me know what are the generic names of these SSRIs so I know if I can get a senior citizen’s discount for all of them. Gusto ko, happy ako.)

Can premature ejaculation have to do with your age? And, if so, does it get better or — heaven help us all — worse with age?

We now have evidence to show that age probably does not have anything to do with it. We have very young men who get it and we have very old men who did not have it before but who now have it. So it’s not really a function of age, it can hit you anywhere from 18 until when you can still get it up.

(DOM representative: I could have answered that question.)

But how about for the young men who have, ubo ubo, loved themselves too much in their youth? There are some who are worried that this can cause premature ejaculation.

Well, even if he was doing it very quickly or if he was engaged in an illicit (sexual encounter), there is a still satisfaction. But for sufferers of premature ejaculation, they are not even satisfied with their sexual experience.

Aside from medication, are there other ways that you can prevent premature ejaculation? Like breathing exercises or relaxation techniques or imagining your yaya?

There are a lot of behavioral techniques. Masters and Johnson back in the ‘70s were the most prominent discussants of premature ejaculation.

And what a great conversation topic it must have been.

There are relaxation techniques but these are learned over time and there’s no guarantee that it will work. (Even if) you want to do relaxation maneuvers so that you won’t prematurely ejaculate, (what if) your partner says ‘Let’s not relax now, let’s relax later’? There’s a lot of variability in the efficacy of those behavioral maneuvers.

(DOM representative: I’m sorry, my hearing aid is not working properly. Are you saying I should use efficascent oil to prevent premature ejaculation?)

Baka naman practice makes perfect when it comes to premature ejaculation? Or practice gives you at least an additional two minutes?

That may be true. Practicing holding back may make it better for you later on. But at some point, your partner becomes tired of practicing too much. But I wouldn’t put it past our patients to try to do that. If you can try to do something to remedy the situation without having to take anything, that would be good. If it can be something that you can manage behaviorally or something that can be managed by a technique that you can perfect over time, then very good.

I’ve read other techniques that involved the manipulation of various pink parts to prevent premature ejaculation, like the Kegel exercise or putting pressure on the base of your penis or even tugging on your testicles? Which one of these techniques involves the least amount of pain?

(DOM representative: Even if somebody else is tugging it, it doesn’t make it any easier.)

Now we’re saying that we now know the science behind it. We know the biochemical and organic parameters of the defects behind premature ejaculation and if we cannot solve the problem, we can at least make things better for you.

And these parameters do not involve squeezing, pressing or tugging?

The only drug that has been formulated specifically to treat premature ejaculation is Dapoxetine, which is designed to be taken on an “on demand” basis. Take it at least one to three hours before your planned sexual activity. If your sexual activity is not planned, then you will have to delay it for a couple of hours to wait for the drug to work.

(DOM representative: I don’t know if my pacemaker can hold out for that long.)

It can be taken with very minimal side effects (with) good chances of success for the majority of men on whom it has been studied. The trials for the Dapoxetine (covered) a total of almost 6,000 men with premature ejaculation all over the world. That’s in Europe, the US and the Asia Pacific Region.

That’s a lot of cleaning up to do, Doc. Do you have advice for those men who are still a bit too shy to come forward over their premature ejaculation problem?

(DOM representative: Then whom can we blame? The government?)

It’s a condition that is treatable and the treatment may be temporary depending on your circumstances. But here’s the thing: if you’re ejaculating less than a minute after your sexual encounter and you and your partner are okay with it, then we don’t have to treat you.

(NGSB representative: Treat you to what? Ice cream?)

We don’t have to treat everyone. We only need to treat the ones who are distressed from that condition. (If you and your partners are distressed, then) we have the opportunity to (fix the problem). You only need (to see a urologist) for that. It’s a condition that can be easily diagnosed by history taking and the premature ejaculation diagnostic tool questionnaire (www.controlPE.ph). There are no specialized laboratory tests that we need to do, there are no sleepovers in the hospital where we can observe your erection while you are sleeping.

(NGSB representative: But let me know if ever you will need footage of that.)

Given the proper evaluation of your condition, your physician can give you a prescription that can (help you with premature ejaculation).

Thanks, Doc. You should have told me I could take an online test, not a practical one. That way I would have kept my clothes on before the start of this interview.