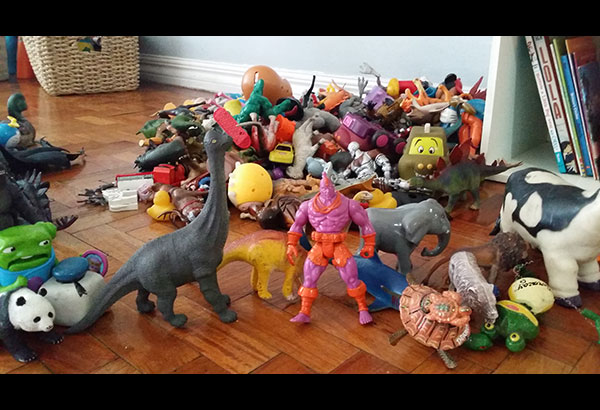 I like playing with myself. But I’m not sure if my wife knows about it. Yet.

In the ungodly hours of the morning, when the whirr of the aircon has lulled my wife to lala land, I scramble for the keys to the handcuffs that my wife uses to keep me chained to the bedpost, deftly slide out of our communal bed, tippy-toe into the children’s bedroom, weave past the snoring yayas, and feel my way through complete darkness until I reach a glass closet. Then, with all the stealth that only a 41-year-old with a lower back problem can muster, I pull out a few choice items from the closet, tippy-toe to a nook in the children’s clothes closet, switch on the night lamp, and engage in several hours of uninterrupted playtime.

With my action figures.

Yes, my super-hero action figures. (It’s a little known fact that playing by your lonesome with action figures late at night is one of the favorite hobbies of No Girlfriends Since Birth [NGSB], among other nocturnal pursuits).

And I boast quite the legion of action figures, too. I consolidated figures from Marvel Comics (for the superhero universe-impaired, this is the sandbox of Avengers, Spider-Man, X-Men and the Fantastic Four, among others) and DC Comics (the playground of Superman, Batman and Wonder Woman) for an RJ Ledesma-directed, written, produced, and voice-acted uber-violent homemade superhero “movie” crossover smack-down which involves the disembowelment of plastic entrails, the utterance of superheroic cuss words (Great Krypton! Sweet Christmas! Suffering Succotash!) and cameo roles by my daughter’s Barbie and My Little Pony figurines.

Unfortunately, it is quite difficult to choreograph a dramatic scene between Wolverine and Rainbow Dash from My Little Pony with Wolverine still encased inside his pristine cardboard box.

Yes, you read that right. All of my precious (channeling my best Gollum impression) action figures have remained perfectly preserved inside their packaging since I purchased them. Back when Whitney Houston first belted out I Will Always Love You. Back when unknown Sarah Lahabati first cried her way into this world. Back when Kris Aquino did landmark films like in Pido Dida 3 May Kambal Ka Na. Back in tasteful 1993.

Some of my NGSB readers may ask, why have I not done the immediate gratification thing? Rip open them babies from their cardboard prisons, press down on their buttons so you can feel the fury of their power-punching action, manipulate their points of articulation to my heart’s content? Follow my geek bliss and use those toys to recreate my favorite comic book storylines in all their stop-motion glory! Those toys aren’t meant to gather mold behind a glass closet, after all — those toys are meant to be fondled, dammit!

Don’t tempt me, you foul-smelling, asymmetrical-armed NGSBs! Those are not just toys, those are investments, I tell ya! Investments! Who needs life insurance and stocks and real estate and multi-level marketing when you can hoard limited-edition action figures and keep them in their boxes to retain their value! With those precious commodities steadily increasing in price, I will eventually afford a house in Forbes park, a fleet of Jaguars, hire an army of yayas with some money left over to fund my 2022 presidential campaign.

You see, my three thoroughly disturbed female readers, my primary man-child vice of choice is actually comic book collecting (and I have the collector’s editions of Archie vs. Punisher, Batman vs. Tarzan and Superman vs. Muhammad Ali issues to prove it). However, I was swept up in a spiraling comic book and action figure boom of the early ‘90s, a speculative boom that pretty much fed off one another (much like zombies). Back then, all you had to do is slap “collector’s item” or “limited edition” on the packaging and collectors would hoard them like they were storing up for a nuclear winter. So, like any good capitalist, the comic book and toy companies were churning out comics and figures like they were currency.

I was certain that each toy would eventually escalate in value to the price of shares in Amazon (since the toy craze happened a year before Amazon was launched. Logical naman, ‘di ba?). So now it was merely a matter of biding my time until those toys could fetch uber-top dollar. And bided I did. Until 2015.

I came home from work one day to find my precocious three-year-old son arranging his little animal figurines in a conga line on his playmat. As I approached to join him on the mat, I squinted because I thought I saw some things in that conga line that had been staring back at me from behind a glass closet for the past 22 years. Then, when I sat on the mat, I finally beheld them: Krule, the purple-skinned immortal X-Men villain with a 20-foot-long hair braid, Forge the Native-American X-Man with a bionic leg and the mutant power of inventing any damn thing he pleases, and Quark, the goat-looking X-Men chuwariwap. Three of my figures had become a part of my son’s animal conga line. They. Were. Out. Of. Their. Boxes.

I felt as if the special punching power of my action figures had been applied to my genitals.

“Anaaaaakkkk!!!! Don’t you realize those toys are just as old as Sarah Lahabatiiiiii!!!!,” I wanted to scream. “They were supposed to pay for your college education and wedding reception! Argh! You will be grounded ‘til you grow pubic hair, do you understand me!?”

But before I could stress away my hair-loss treatments, my initial baby damulag reaction was swiftly replaced by a mature mindset that had developed over years of self-sacrifice, prayers and electroshock therapy: I took a deep breath, composed myself, and blurted out a more emotionally intelligent response:

My son just looked at me and giggled. Then he started tugging at the hair braid of immortal X-Men villain Krule until it finally broke off. When the hairpiece came off, I didn’t realize how loud I could cry.

Several sessions and 50,000 volts with my therapist later, my wife suggested that I visit the Toy Convention at Megamall to see if I could find replacement X-Men figures. Like any housebroken husband, I nodded obediently. But despite my wife’s well-meaning intentions, I didn’t have the pink parts to tell her that those action figures our son unboxed might cost just as much as the Malampaya fund.

So like any man-child following his geek bliss, I braved the hundreds of cosplayers and rabid toy collectors who squeezed into the convention’s main hall to seek out my X-Men. With a credit card limit of P2,000 (if I even attempted to spend any more beyond that limit, my wife swore that she would turn me into the anatomical equivalent of a Ken Doll).

I spent several hours scouring through vendors stalls for vintage action figures from the tasteful ‘90s (only to discover that the ‘90s weren’t as tasteful as I had thought, with the Furby dolls and Tamagotchis and those abominations the Treasure Trolls). By the time I had come up with the umpteenth rainbow hair-colored treasure troll, I finally spotted him still intact in his packaging in an unassuming bargain bin along with other ‘90s stowaways. It was my Krule!

I grabbed Krule from the box, closed my eyes, then peeked cautiously at his sticker price. I was incredulous! He was being sold for a mere P560. What a steal! And to think that it cost me all of my hard-earned P175 back in 1993. Don’t the sellers realize the value of these collector’s items toys!? I thought, smiling devilishly. I quickly checked online to see how he much he would fetch for me on eBay. Then the price of Krule popped up on my cellphone.

He was P250. Without shipping and handling charges.

Argh. There goes my house at Forbes Park. And the army of yayas.

Sigh. Oh, well, anak. Enjoy Krule and Forge and Quark. They have been waiting 22 years to join your animal conga line. But if you try to open up another boxed toy from my glass closet, I’m gonna get all Wolverine on your three-year-old behind.

I guess I will have to wait for another 50 years (or so) until those toys can fund my presidential campaign. In the meantime, I need to find another type of investment vehicle. I hear those Emgoldex gold bars are quite good.