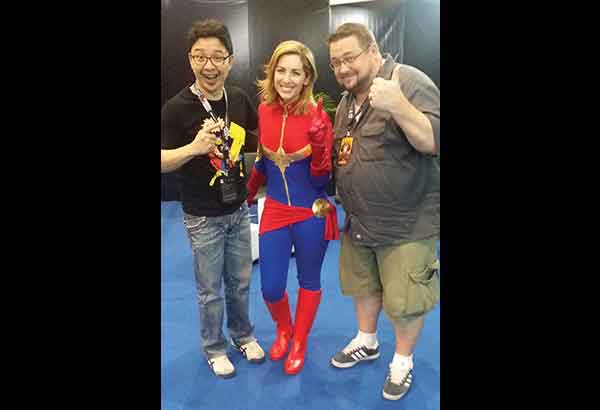 I think C.B. Cebulski could be my soulmate, because we share an interest in the same things that make our pink parts tingle: comic books and food.

As the vice president of Marvel’s International Development and Brand Management, he zips across the world in his Avengers Quinjet spreading the gospel of Stan Lee to a growing Marvel fandom. Along the way, he explores the culinary cultures of the countries he visits and chronicles what goes into his mutant belly in his blog (www.eataku.com).

During his recent visit to Manila during the Asia Pop Comic Con (where he crossed off a visit to Sarsa from his bucket list of restaurants), I spoke with C.B. to find out things that would make local comic book geeks leak web fluid: Did he know anything about the upcoming Star Wars: The Force Awakens movie? Will a Pinoy character soon be joining the ranks of the Avengers? And finally, since Disney now owns both Marvel and Star Wars: Will Luke Skywalker meet Star Lord? Will Donald Duck meet Howard the Duck? And will Chewbacca meet Pluto?

C.B. CEBULSKI: There’s a back and forth. The comics influence the movies and the movies influence the comics. And it’s the same with the video games, the animation and the action figures. Especially with toys!

There’s a new term, “toyetic.” Can you make a cool toy out of this design or storyline?

The way I like to look at it is that Marvel is one big living organism — the movies are the “face” because that’s what everybody “sees,” the licensing, video games and animation are the “limbs” that keep the body moving and help support the “face.” But the comics are the “heart” — we are the creative organ that pumps the stories into the rest of the divisions. Without the heart, the rest of the body dies. But, in the end, it’s a symbiotic relationship across all the Marvel divisions.

I wonder what part of Marvel contains the pink parts? With all the new readers coming to comics, are you also trying to make comics more accessible for first-time readers? You’re doing a book right now called Secret Wars that appears to be tidying up years of Marvel Comics backstory.

Secret Wars isn’t so much a housecleaning as it is one of our “big event” comics that we do every summer. With Secret Wars, we’re just putting a lot of pieces “back in order.” A lot of things have gotten “messed up” (over the years) — like storylines that haven’t been tied up or conflicting origin stories. So we wanted to put those things straight. (Having said that), Marvel walks the fine line of bringing in new readers. We’ve had to work with a continuity that started with Spider-Man since 1962! Someone recently said that it’s “the longest single fictional continuous story in history.” For 50 years, we’ve been telling the same story with the same characters. And we’re going to continue that tradition.

Given the growing global awareness for Marvel characters, I notice there’s been a push towards highlighting or creating more minority characters like Red Wolf (an American-Indian superhero) and Ms. Marvel (A US teenage female character of Pakistani-Muslim ethnicity).

It reflects the original tenet of Marvel that Stan Lee came up with: “The world outside your window.” Back then, Marvel comics were created basically by white male New Yorkers and were read by white male Americans. We’re very self-conscious now that, with the success of the films, the (Marvel) world is so much bigger. So Axel Alonso, our editor in chief (who is of Mexican descent), brings a lot of his “tastes” to (the universe) and wants to see more minorities represented in the comics. The thing is that we don’t want it to seem forced, we want it to feel authentic. We always bring in the right creators for the right job. We’re not saying that minority characters need to be written by minority writers. Black writers can write white characters and female writers can write male characters. It’s about finding the best person with the right voice and the right understanding of a specific character. The only thing that Marvel discriminates against is bad art! (Laughs)

That being the case, will we see more Filipino characters in Marvel? I recall a team of “heritage” super heroes called The Triumph Division that appeared in Iron-Man (who were unfortunately killed off). I actually enjoyed those characters because they weren’t clichés of what Filipino characters should be like (i.e., a superhero who is an expert with Arnis or a balisong).

Exactly! Before, the characters were stereotypical. An Irish character would be Shamrock or a Japanese character was always a ninja or a samurai. Now we’re taking great efforts (to showcase diversity) and it’s reflected in the writers and artists who are also bringing their background to the comics, giving (the comics) a more authentic nature. We just introduced a new character in Korea called White Fox (who was based on the Korean myth about a nine-tailed fox developed by Korean cartoonist Young Hoon Ko). (Originally created as a webtoon for a Korean webportal), she’s a very cool character with a very Marvel origin. The Korean audiences have responded very well to her and she will be brought into the main English-speaking Marvel universe through Deadpool and eventually onto one of the Avengers titles. If there is a right creator with the right idea for a character from the Philippines based on the folklore or fiction or culture, we’re completely open to those ideas.

Since Disney owns both Marvel and Lucasfilm) creator of Star Wars), I’m sure many pop culture fans are excited over the new synergy. Will we see Darth Vader going toe to toe with Doctor Doom very soon?

One thing I’ve learned from Disney is how each brand is a separate entity and that they are treated and respected on their own. In the comics, I don’t think you’ll see Star Wars characters meet the Guardians of the Galaxy or Goofy fight Deadpool very soon.

Ever since Disney acquired Star Wars, the new Star Wars comics produced by Marvel have been best-sellers, oftentimes beating out Marvel Comics characters books themselves!

Yup! The new Star Wars comics are exciting, in canon (officially part of the Star Wars universe) and produced by top creators. It’s bringing out in droves Star Wars fans to the comic shops! And the buzz about Star Wars: The Force Awakens is also contributing to the comic sales.

I’ve also noticed that you’ve also pursued pretty controversial storylines in the comics (i.e. Han Solo has a wife! And it’s not Princess Leia) that are now considered accepted canon in the Star Wars universe.

There’s actually a Lucasfilm comic group that’s controlling all the Star Wars continuity. All the films, animation, books, video games and comic books now all exist in the same universe. The group works will all the groups to make sure there is no conflict in the stories. The stories we’ve written were approved two years ahead of time. We know the events in Episode 7 and what we’ve been briefed on the events in Star Wars: Rogue One because the comics we’re publishing take place between Episodes 4 and 5. So we’re in a very sweet spot where we can play with stories after the explosion of the Death Star. We’re going to keep on telling those stories over the years!

I pray we will never see Jarjar Binks in any of those stories. Will there be more Marvel characters migrating to Disney animation, like in the case of Big Hero 6 (originally a Japanese superhero team based in the Marvel universe)?

I don’t know specifically, but I would think so. At one point, Disney came to us and said they wanted to take some older Marvel properties and try to reinvigorate them. Big Hero 6 was one of those. The Pixar folks took it, ran with it, and it became a huge success. There are older Marvel properties some people might have forgotten about that you might be seeing from Disney in the future.

I look forward to the day that Frog-Man becomes a box office success. What should we look forward to in the Marvel Universe front across the different entertainment divisions?

On the comic book front, I’m really excited for Dr. Strange (with Benedict Cumberbatch), it’s really going to redefine “magic” in the Marvel Universe. On TV, Daredevil Season 2 is shaping up to be something truly special — the Punisher and Elektra are going to be there! Personally, I’m excited for the new TV show Jessica Jones, because I was the editor of the comic book. To see the characters and storylines that we crafted on the screen is pretty thrilling. For movies, Captain America: Civil War is going to be pretty damn amazing! I’ve also seen some of the visualization they’re doing on the upcoming Dr. Strange movie and they’re hoping to pull off special effects that you’ve never seen on the big screen before. The visuals are going to be absolutely mind-blowing!

Lastly, if Jollibee applied for the Avengers, would he be accepted?

Jollibee would need a cool origin story, he would have to be a little bit of a flawed character and would have to learn some sort of life lesson to become a hero. If we can work out Jollibee’s backstory, he’d make a great Avenger!

And he might even get romantically involved with the Wasp.