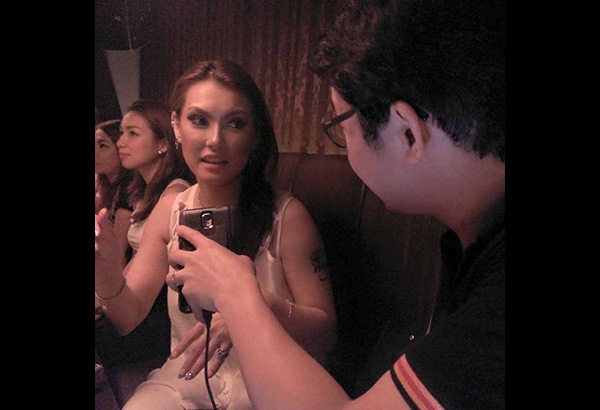 Maria Ozawa, in the flesh

If the name doesn’t cause your nefarious body parts to spontaneously combust with excitement, then I suggest you skip this week’s column.

But when the legions of Dirty Old Men (DOM) and No Girlfriends Since Birth (NGSB), who follow this column sacrilegiously, discovered that their favorite, ahem, adult video entertainment star had slipped into the country last week, just the mere mention of her name had them applauding with one-handed glee.

Just who is Maria Ozawa, my three female readers may ask? I suggest you go online and conduct extensive research on Wikipedia. (Which is exactly how I prepared to write this column. No, really.) It was there that I found out Maria was half-Japanese and half-French-Canadian. And that is as far as I got with my extensive Wikipedia research.

After having the questions screened, dissected and fumigated by the MTRCB, hearing confession and bringing my yaya with me for protection, I was ready for my interview with Maria Ozawa.

RJ LEDESMA: Thank you so much for agreeing to the interview. Unfortunately, part of my entourage who are members of the Maria Ozawa fan club could not join me because of good taste and temporary restraining orders. However, they asked me if you could autograph their bootleg DVDs. May I ask what brings you to the Philippines?

MARIA OZAWA: This time, I came to the Philippines to promote my own work…

(NGSB representative: Ohmaygaassshh! That means you’ve been to the Philippines before!? How come I’ve never seen any of your videos in the Philippines!?)

…Like modeling or magazine work. I just had a radio interview (with Boys Night Out) a few hours ago. I would like to do more work here in the Philippines.

Hay naku, I thought I had you and the NGSB neutered before this interview. Maria, what other kinds of work would you like to do in the country?

I would prefer to do more exciting things like club events and TV airings somewhere.

I’m not sure if you’re aware of it but social media (cough, cough) exploded in a frenzy when they discovered you were in Manila. Did you realize that you had such a large following in our country?

No! Not at all. I’m so surprised! I can’t believe that I have so many fans here in Philippines.

(RJ pointing to the NGSB representative) No, that is not the appropriate way to show how big a fan you are. I understand that, in your previous life, you used to do modeling work. How did you move from modeling work to adult entertainment work? Not many people would find that to be an easy transition.

When I was 18, I really admired this Adult Video (AV) job. I had a friend who was doing AV beforehand. I asked her if it was a good job and she told me that it was “worth trying.” So I tried it out. I wanted to be famous, so I tried my very best to be famous in the AV Idol project. So here I am right now.

(DOM representative: And we’ve come around to see you.)

If you weren’t doing AV, what type of work would you have been doing?

I don’t know. Maybe I would be doing a “normal” job like working in a club or teaching English.

(NGSB representative: I could use a little help with my dangling participles.)

I know you were educated in an international school, so is English or Japanese your first language?

Japanese is my first language.

Can you also speak French?

(DOM representative: But can you…)

Shut up, shut up, before I have that Sumo wrestler sit on you. Maria, when did you realize that you were a “gifted” AV performer? Based on my extensive Wikipedia research, you were actually nervous during your first couple of AV performances.

It took me a long time to realize (that viewers appreciated my acting), but maybe after a year or two I had lots of different fans. So that’s when I realized that maybe my acting is getting better and better with every movie that I take.

(DOM representative: But remember hija, the journey is just as important as the destination.)

When did you realize that your AV work had made you so popular?

Yeah! When I went to Taiwan. I was just shopping around with my manager when (suddenly) the paparazzi came and they said they wanted to take a picture of me because I was famous in their country. That’s when I realized that I (had become) really, really famous.

(NGSB representative: You also have a special place in the hands, este, hearts of many Pinoy males.)

Why do you think you became more popular internationally versus your fellow female AV stars?

Maybe because I speak English, and other people can’t.

(DOM representative: You seem to be pretty good at body language as well.)

AV must be a demanding profession. Is there a way that you physically prepare for the movies?

(NGSB representative: You look pretty calm based on my movie reviews.)

Given the very personal nature of AV, how do you prepare yourself emotionally for your roles?

Are you trying to portray a “character” when you are onscreen?

I’m interested in the technical aspects of the filmmaking.

(NGSB representative: Yeah, sure you are.)

Do you have only one camera rolling while shooting a scene?

No, we have three cameras (rolling at the same time) taking the scene from different angles. Then (after the scene is done), we take another roll just in case.

(DOM representative: Wow, that must be a hard job.)

I hear that in Japanese AV, they pixelate the “major performer” in the movies. Is there a particular reason behind this?

(NGSB representative: That’s a relief. For a moment there I thought those Japanese men had their major performers replaced with cybernetic body parts.)

Were their downsides to being an AV star?

I lost lots of friends. Some of my friends were okay with it, some other friends didn’t like it. But it’s okay now.

How was it like for your family when they found out about your AV work?

My mother was really angry (about my AV work) and she said she wouldn’t speak to me unless I quit.

Now that you’ve retired from the AV business, have you already spoken with your mom?

I went to see my parents last year and (now) we’re okay.

Looking back at your AV career, what have you learned from the experience?

I learned a lot. I met a lot of people, I was able to see different places. I feel so strong right now.

And would you be interested to appear in a local film produced in the Philippines?

(NGSB representative: Please let me know if you will be holding auditions for the male lead. Or body double.)

I am still trying to find a politically correct answer to that question. Especially since that question was posed by someone whose Facebook status says that she is married to RJ Ledesma. In the meantime, my nefarious body parts have been placed in suspended animation in our freezer.