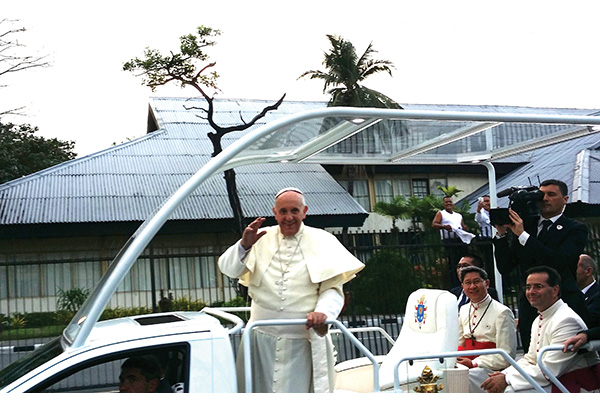 Our dear Pope Francis, after taking in the speech of President Aquino — in which he not only welcomed you to our shores but also regaled you with the current Facebook status of church-state relations — you never made it quite clear whether or not losing one’s hair was a mortal sin (but to be sure, I will make sure to keep up with my hair-loss prevention treatments).

Nevertheless, I am sure in those few private moments you had with our President (during which I pray you blessed his scalp as well), you found in that tesseract that is your heart the mercy and compassion to empathize with the pain he was sharing — both as a son who lost his father in a hail of assassin’s bullets and as a man shepherding a country choked by systemic corruption — which is the same indiscriminate mercy and compassion that you extend to all members of God’s family.

When your arrival in the country was broadcast nationwide, I squealed as the camera peeked in at you through the passenger seat window. And when you finally stepped out, your zucchetto (skullcap) swept up in all the excitement, I felt tears well up in my eyes.

“You are here, Lolo Kiko, you are here!” My heart exploded. “Thank you for visiting us, your faithful! Thank you!”

Among my fellow (struggling nonetheless practicing) Catholics, I think there are those of us who measure our years by “significant moments” in our faith. Counted among these moments are our “papal encounters” (or what many have fondly described online as “Popestock”) which, for me, have been turning points that animate my faith life — much like first communion or high school retreat (like Search-in or Days with the Lord) or holy matrimony or becoming part of a faith community (like Single Young Adults or Couples for Christ).

Given this, I feel particularly blessed that I’ve experienced “Popestock” three times in my faith life (and, God willing, this won’t be my last encounter). The first was during St. Pope John Paul II’s visit to the country back in 1981. Admittedly, I don’t recall much from that encounter (as it was a time when I had not yet grown hair in significant parts of my biology), although I always thought that Marvel Comics released The Life of Pope John Paul II comic to commemorate his visit. (Yes, there is an actual Marvel comic. And, nope, the Pope didn’t battle Thanos or Loki in that issue.)

The second encounter was during the World Youth Day in 1995. As a college senior (for whom hair loss was still a figment of my imagination), I was quite satisfied with being part of the sea of faithful along Roxas Boulevard who were swept up in the fervor of the Pope’s visit. But as my family strolled down the length of the boulevard, police security started to cordon off the road. Along with the other faithful, my family crowded around the cordon and were blessed that, a few minutes later, Lolo Karol waved at us as he drove by in his popemobile (I wish I was able to capture and share that moment, but this was a time before Facebook and before digital cameras, but slightly after the time that the newest model cellphone was the size of a briefcase). Although we only saw Pope John Paul II fleetingly, I found myself weeping uncontrollably at mere sight of him. Because of that 1995 visit, the lyrics of Tell The World Of His Love has been imprinted on my long-term memory.

But during this third Popestock, my dear Lolo Kiko, circumstances surrounding my family’s personal security exacerbated with a life-threatening family accident and work commitments initially dissuaded me from joining the faithful in catching a glimpse of your pontifically “rock star” presence. I comforted myself by saying that I have been eagerly following stories of your papacy on social media, and that would be enough for me.

From stories that have sparked human interest (You were a bouncer in your former life? You snuck past the Swiss Guard to break bread with the homeless in Rome?) to those that reignited lively theological discussion (Can atheists go to Heaven as well if they do good? The Church supports the theory of evolution and the Big Bang?) to those that could reform the world’s geo-political landscape (How do we eradicate modern-day slavery and human trafficking? How do we put an end to economic inequality that continues to oppress the poor?), I was content to photobomb you on television (which I did several hundred times) as my most enduring souvenir of your visit.

But it was our children, Lolo Kiko, who were of a different mind. “My cousins are going to see Pope Francis tomorrow, Daddy,” my five-year-old daughter intimated to me while we watched your arrival on TV. “Can we see Pope Francis, too?” With her plea, whatever hesitation I had in my heart had melted away because I would be visiting the Catholic world’s foremost superhero.

Our spontaneously (and potentially ill-conceived) plan with my brother-in-law’s family was to barrel through EDSA Southbound near Pasay until we found ourselves in the general vicinity of the SM Mall of Asia to catch a glimpse of His Holiness before he made his way to the Meeting on the Families. Unfortunately, there was no barreling to be done as several hundred faithful with cars had exactly the same idea while vegetating on EDSA Southbound.

Spontaneous (and potentially even more ill-conceived) Plan B was to drive down side streets parallel to Roxas Boulevard until we inched our way closer and closer to Roxas, then invoke divine intervention to drive back down the Boulevard to anywhere remotely close to Mall of Asia and hopefully steal a glance at the Pope’s flying zucchetto.

So far, Plan B seemed to work as we navigated our way to a relatively traffic-free Buendia. But a few blocks short of Roxas, a traffic enforcer informed us that the roads leading towards the boulevard had been closed to the public for the past 30 minutes. Argh. Not even a hail of Hails Marys would convince the enforcer to let us edge our car a few more meters ahead.

We ended up parking along Buendia (praying that the MMDA would be more pontifically minded that day) then proceeded to drag a gaggle of kids towards Roxas Boulevard. After a brisk walk, we found ourselves standing on a tree-lined island of the road sandwiched between the end of the overpass of Roxas Boulevard and the Philippine Trade Training Center.

However, we were worried that Lolo Kiko might not be passing through this route on the way to Mall of Asia. Although there was a gathering crowd, it was nowhere as teeming as the waves of faithful we had seen on television. In fact, we were surprised that we had quickly slipped into a cozy spot right behind the police cordon (we discovered that these faithful officers were bused in all the way from Pangasinan and Ilocos Sur to shore up the human barricade).

Still uncertain if the popemobile would zip by this stretch of road, we decided to cross ourselves and pray the Novena for the Papal Visit followed by all four mysteries of the Rosary (this was also a great way to keep our kids focused lest we adults be subjected to the complete soundtrack of My Little Pony cartoons for the next 40 minutes). “At least we made the effort,” I thought. As soon we wrapped up the last decade of the Joyful Mysteries, we could hear the screeching of the crowd punctuated by a flurry of blinking red lights from the other end of the road.

“It’s Pope Francis, sweetheart!” I exclaimed to my daughter as I hoisted her up on my shoulders so she could get an unobstructed view of the Holy Father. I whipped out my cellphone camera as my daughter waved excitedly at the oncoming popemobile shouting “I love you, Pope Francis!”

And before we realized it, Lolo Kiko was right in front of us! The head of the Catholic Church, waving in our direction framed by his wide comforting gaze and genuinely warm smile. I felt my heart explode again. Thank you, Lolo Kiko! I told myself, for this little miracle of your presence!

In those few precious seconds as Lolo Kiko passed us by, I wept just as unabashedly as when Pope John Paul II rode past my family during World Youth Day (and, I tell you, it’s not that easy to weep unabashedly while carrying your daughter on your shoulders while taking a barrage of photos of a moving popemobile). When we made the trek back to car, I wondered just what was this magical ability of popes (and Pope Francis in particular) to activate my tear ducts?

Once I had regained my cellphone signal, I was deluged by numerous posts and tweets about Lolo Kiko from friends of different persuasions — from fervent Catholics to lapsed Catholics to former Catholics to members of Christian churches to friends of other faiths and even to secular humanists — and discovered that I was not the only one struck by this tear-inducing phenomenon.

Lolo Kiko, there is still a lot I need to take in from your painfully short but meaningful visit to our country. There is still so much for me to appreciate, to reflect on, to pray over and to act on from all the sermons that you shared from your heart overflowing with a great humanity.

But thank you again for visiting our country, Lolo Kiko. Thank you for the opportunity to experience the blessing of your presence with my family. And thank you for making me cry. You have made us all feel like rock stars.

I genuinely hope you return to our shores again, Lolo Kiko. And, by the grace of God, I pray that I still have a full head of hair on your next visit.