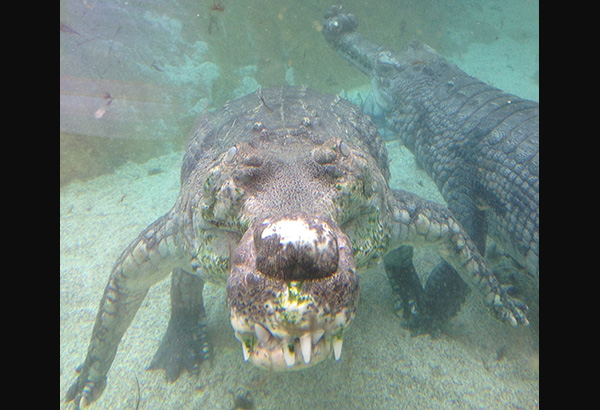 Where the wild (and weird) things are

My two-year-old son — who rules our household with a Skyflakes- and condensada-stained fist — can identify the letters of the alphabet, is slowly weaning from his baby bottle and is partly toilet-trained. Given his level of maturity, I thought it was time that he learned about the birds and the bees. Literally.

During a recent family trip to the Lion City, I wanted my Buddha boy to appreciate the fact that real animals were not animated, could not talk, and did not break out spontaneously into song and dance (also that birds were not spherical and could not be launched as projectiles),

So we took him on a crash course to the Singapore Wildlife Reserves which included a visit to the Singapore Zoo (a 26-hectare wildlife park nestled in the lush Mandai rainforest setting which is home to over 2,800 animals representing over 300 species of animals), the Night Safari (a safari park for over 2,500 animals in their naturalistic nighttime habitats) and the River Safari (a wildlife park that features aquatic ecosystems from the different rivers of the world — from the Ganges to the Nile to the Mississippi — as well as 6,000 land and aquatic animals representing 200 species).

This zoological expedition was enough to give Noah a run for his money. But it was well worth it as my son enjoyed all three visits (although he was slightly confused as to how the animals had escaped his iPad). He almost dozed off at the Night Safari, so it’s a good thing we replaced his milk with Red Bull. (How could we let him fall asleep? Every minute he was napping was at least S$2.36 worth of foregone entertainment!)

However, it was not just my son who appreciated all these wildlife encounters. I also learned a couple of things about animals that my wife is now attempting to lobotomize from my head with a well-placed screwdriver up the nose.

• There is a lot of inter-species booty-humping going on out there. The ones you might be more familiar with are when lions and tigers get wild in the wild (but when lions and tigers interbreed, their offspring are sterile. The hybrid of a male tiger and a female lion is called a tigon, and the reverse is known as a liger). But aside from these giant amorous cats, there are a lot more illicit and terribly interesting (interesting in the same way that a seven car pile-up on EDSA is interesting) dangerous liaisons happening behind the bushes. These include the raccoon dog and the babirusa (which means “pig-deer” in Malay). But the animals that had some fermented water and hallucinogenic mushrooms before their biologically explosive trysts were the Greater Mousedeer and the Bat-Eared Fox. The morning after must have been really awkward for their parents, especially for the parent on the lower rung of the food chain.

• There are some animals that will literally explode if they eat the wrong food. There is a primate from Borneo called the Proboscis monkey whose nose we need to pixelate for this newspaper (lest we get reprimanded by the CBCP). But aside from this seemingly misplaced appendage, the more interesting thing about the Proboscis monkey is that it appears to be perpetually pregnant. No, she is not trying to make pikot the other monkeys (except maybe for the dad of that Monkeyrhinoceros). The reason for their distended bellies is that their stomachs contain bacteria to help break down the cellulose from their mostly leaf-based diet. These monkeys avoid sweet fruit because if this is digested by the bacteria in their stomachs, gas is quickly produced and expands their bellies like a balloon until they pop and decorate the surroundings with their insides. Wow. At least when I eat sweet potato, I am able to expel my explosions. (However, those within a 10-footradius suffer second-degree burns.)

• There is no need to waste your waste. Did you know that kulangot isn’t all that bad? For example, pygmy hippos do not have sweat glands. To keep themselves cool, they stay in the water during the day and secrete mucus to serve as “sunblock.” Meanwhile, the triangle cichlid fish feeds its fry with nutritious mucus from its skin. When I found this out, I thought of offering my mucus as a food supplement to my own children. However, I may have to first seek the approval of the Food and Drug Administration (FDA). But if I am able to mass-produce my mucus, there might be a market for it in China.

• Pygmy hippos are the underwater ballerinas of West Africa. But its ability to pirouette across riverbeds has no bearing on what I find intriguing about this nocturnal creature. Apparently, male hippos yawn at each other to show off their teeth and threaten their rivals. DOMs exhibit the same behavior with lesser DOMs by yawning to expose the amount of gold fillings in their teeth. In contrast, when a male hippo yawns in the presence of a female, it is a sign of affection and part of courtship display. When a DOM yawns in front of a female, it means he is sleepy and she needs to finish up her ladies’ drink.

• Necking doesn’t always lead to chikininins. Just ask the giraffes about it. Male giraffes often engage in necking. When I found this out, I thought to myself, “That’s none of my business.” But in the giraffe world, male giraffes establish rank by wrapping or slamming their necks (thus, “necking”) against each other. This “necking” goes on for about 30 minutes until one of the giraffes concedes or takes it to the next level.

• Being bald is really not that bad. Just ask a sugar glider, a small, nocturnal gliding possum. Upon closer inspection, you will notice a small bare patch on its head that resembles a bald spot. But don’t worry, the glider doesn’t need hair loss prevention treatment as much as I do; what resembles a bald spot is actually its frontal scent gland that develops in mature males and is used to mark their territories, mates and babies. (Hmmm… no wonder my dad’s head smells kinda funny. And no wonder my mom has his head fumigated twice a week.)

• The zombie apocalypse is not as farfetched as you may think. There have been rumors of a monster-sized man-eating goonch catfish devouring swimmers in India’s Kali River and leaving nothing behind except for human-sized tinik. Supposedly, these catfish developed a taste for human flesh after devouring the corpses that were deposited in the river. But the pubic hair-raising thing about this development is that it is not only the goonch that has gained a craving for your pink parts. Tens of thousands of carnivorous soft-shelled turtles were released into the Ganges River to feed on the decaying human and animal carcasses. Now you know where ground zero of World War Z will start.

• Where is your magic mike? What’s the use of a mating call when nature doesn’t have a built-in karaoke system? To make up for this, evolution tweaked the male crocodilian Indian gharial’s snout by forming a bump at its tip to amplify the buzzing sounds made in courtship. Similarly, the male Simiang gibbon has a throat pouch that balloons out and acts as a resonator to amplify calls and attract mates. With their built anatomical sound systems, they can belt out their animal kingdom versions of a My Way showdown without being worried that they will be graded for the quality of their performance.

• Urine my spot. Tapirs — large herbivorous mammals similar in shape to pigs with a short, prehensile snout — use scents to talk to one another. Unfortunately, they do not use deo-colognes. Rather, they employ (or, more appropriately, deploy) urine as scent markers to attract their mates. They spray it on bushes to let the other tapirs know, “I’m going to get prehensile on your a$$ if you stay in my spot, b&^*$!” Sometimes, my wife complains about the smell of my pee all over our banyo. Can’t she tell that I’m trying to communicate with her!? She also doesn’t realize that it is difficult to aim for the toilet bowl when not all your appendages are as prehensile as a tapir’s.

• There is a real wolverine, after all. And it is not fighting to make the world a better place for humans and mutants to peacefully co-exist. Wolverines are the largest members of the weasel family whose thick fur has adapted for the cold artic weather (admittedly, I was quite disappointed that it did not sport adamantium claws). Although the wolverine does not have a healing factor, it does have a mutant power: it marks the carcasses they feed on with its incredibly stinky urine (that is why wolverines are also known as “stink bears”). In other words, wolverines pee on their own food. Man, not even the soft-shelled turtle would touch that carcass.

Since I enjoyed the zoo so much, my wife is contemplating loaning me to the facility on an indefinite basis in exchange for one of the baboons. Though she will miss me, she says she may eventually not be able to tell the difference between me and the baboon. But on second thought, maybe she will. The baboons might be toilet-trained.